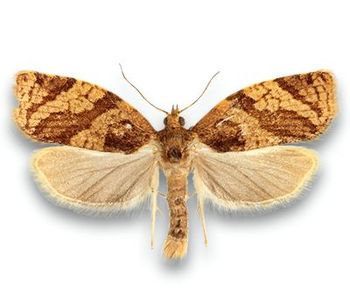 This Adults show sexual dimorphism. The wingspan varies between 15-22 mm. The female has blackish brown forewings with a dark brown design. The male is smaller, the forewings are yellow-brown with a reddish-brown pattern. The fruit moth is a polyphagous species. It attacks the larvae of numerous species of fruit trees (apple, pear, peach, apricot, plum, etc.), as well as some forest species (maple, beech, hornbeam, birch, etc.). On the fruits, the larvae produce superficial bites up to 6 cm long and up to 3 mm deep, through which the spores of some pathogenic fungi, such as brown rot (Monilia fructigena Pers.), penetrate, which cause fruit to rot and fall.

Fruit peel moth is widespread in many European and Asian countries.

Fruit moth has 2-3 generations per year, depending on the climate zone. It overwinters in the larval stage at the age of VI, in a dense white silky cocoon, on the branches of the trees around the buds. In spring, at average daily temperatures of 9 - 10°C, the larvae resume their activity, forming silky galleries to the nearby buds, with which they feed during the day. The adults appear towards the end of May until June. The prolificacy of a female varies from 170 to 400 eggs.