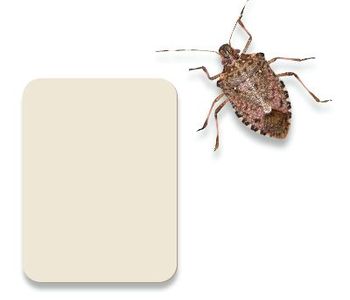 Adult brown marmorated stink bugs are approximately 1.7 cm (0.67 in) long and about as wide, forming the heraldic shield shape characteristic of bugs in the superfamily Pentatomoidea. They are generally a dark brown when viewed from above, with a creamy white-brown underside. Individual coloration may vary, with some bugs being various shades of red, grey, light brown, copper, or black. The term "marmorated" means variegated or veined, like marble.

The brown marmorated stink bug, like all stink bugs, is a hemimetabolous insect. Development from egg to adult takes approximately 40 to 60 days, depending on temperature and photoperiod. After hatching, first instar nymphs may aggregate around the egg clutch before molting and dispersing to feed. Adults can produce multiple egg clutches throughout their lifespan.