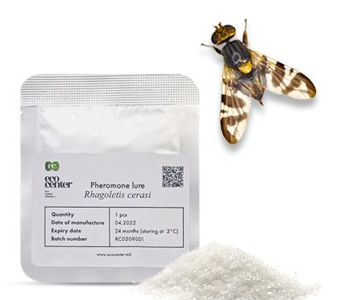 Rhagoletis cerasi (the Cherry fruit fly or European cherry fruit fly) is a species of fruit fly in the family Tephritidae. The adults can be found from late May to early July. They feed on the sugary secretions produced by the cherry itself or by insects (such as the aphid honeydew). These fruit flies are considered a major pest of cherry crops in Europe and Asia. They damage also the fruits of apricot, honeysuckle, barberry, bird cherry and snowberry.

This species is widespread in most of Europe, except British Islands, in Western Siberia to Caucasus, in Kazakhstan, Central Asia and Altai. It was first detected in North America in 2016.

The adults can be found from late May to early July. After 10-15 days the females lay 50-80 eggs. During the ripening the larvae leave the fruit and pupate in the soil, where they overwinter. Usually this species has one generation every 1-2 years.