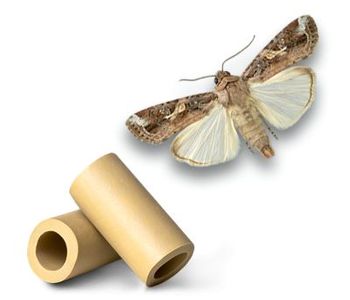 Is s species in the order Lepidoptera and is the larval life stage of a fall armyworm moth. The term "armyworm" can refer to several species, often describing the large scale invasive behavior of the species' larval stage. It is regarded as a pest and can damage and destroy a wide variety of crops, which causes large economic damage. Its scientific name derives from Frugiperda, which is Latin for lost fruit, named because of the species' ability to destroy crops.

The fall armyworm is widely distributed in Eastern and Central North America and in South America. It cannot overwinter in below freezing temperatures, so it only survives the winter in the most Southern regions of the United States, namely Texas and Florida. Because of this, the fall armyworm is a more prominent pest in Southeastern states. However, seasonally it will spread across the Eastern United States and up to Southern Canada, inhabiting areas with suitable food supplies.

Although the length of a life cycle varies slightly throughout the different regions, a typical Spodoptera frugiperda will complete 4-12 generations every year.