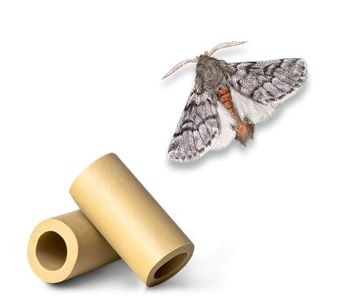 Is a moth of the subfamily Thaumetopoeinae in the family Notodontidae, known for the irritating hairs of its caterpillars, their processions, and the economic damage they cause in coniferous forests. It is one of the most destructive species to pines and cedars in Central Asia, North Africa and Southern Europe.

The species is native to the Southern Mediterranean area, North Africa, the Middle East, and Southern Europe, occurs in North Africa from Morocco to Libya.

Each female lays an "enormous number" of eggs near the tops of pine trees. After hatching, the larvae eat pine needles while progressing through five stages of development (instars). To survive through the winter, the caterpillars construct a nest of silk threads, making them one of the few species of temperate zone insects where the larvae develop in winter. Around the beginning of April, the caterpillars leave the nests in the procession for which the species is known.