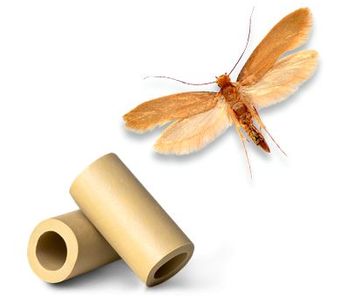 This moths are considered a serious pest, as they can derive nourishment from clothing – in particular wool, but many other natural fibres – and also, like most related species, from stored foods, such as grains.

This moth's natural range is Western Eurasia, but it has been transported by human travelers to other localities. For example, it is nowadays found in Australia.

Females lay eggs in clusters of between 30 and 200 which adhere to surfaces with a gelatin - like glue. These hatch between four and ten days later into nearmicroscopic white caterpillars which immediately begin to feed. Life cycle may be completed within one month under the most favourable conditions, but may take several years. The overall life cycle from egg to egg typically takes 4-6 months, with two generations per year.