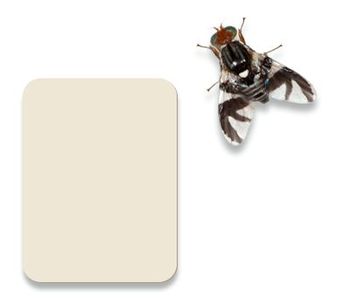 The apple maggot (Rhagoletis pomonella), also known as the railroad worm (but distinct from the Phrixothrix beetle larva, also called railroad worm), is a species of fruit fly, and a pest of several types of fruits, mainly apples.

This pest has a widespread distribution, being found on six continents (Europe, Asia, Africa, North and South America, Australia, and Islands in the Pacific).

Adult female Rhagoletis pomonella are shiny black with white markings and an average length of 6.25 mm. Their wingspan averages 12 mm. They have green eyes and a white stripe on each side of the thorax. The abdomen is shiny black with four uniform white bands. When the ovipositor is not in use, it is retracted completely into the abdomen. The ovipositor is hornlike, hard, and chitinous. Male Rhagoletis pomonella have a similar appearance to the females but are smaller with an average length of 4-5 mm; the size of the abdomen is the main difference, with only five of the seven segments visible.